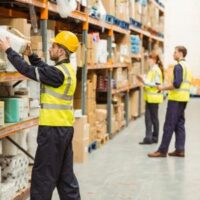 After it received a “referral” from an unknown source, the Department of Labor began investigating Amazon warehouses in Orlando, New York City, and Chicago.

Officials are specifically concerned about the fast work pace Amazon demands. Amazon has repeatedly come under fire from lawmakers, regulators, activist groups and its own workers over its treatment of warehouse and delivery employees. Critics have increasingly zeroed in on Amazon’s use of productivity quotas, arguing its relentless focus on speed leads to on-the-job injuries at warehouses. Multiple studies by the Strategic Organizing Center, a coalition of labor unions, attributed high injury rates among warehouse and delivery workers to Amazon’s “obsession with speed.”

In a statement, an Amazon spokesperson said “We’ll of course cooperate with OSHA in their investigation, and we believe it will ultimately show that these concerns are unfounded.”

Falls, hearing loss, and repetitive stress injuries are among the most common warehouse worker injuries in the Sunshine State.

Overall, falls are the leading cause of missed work days in Florida. These injuries are especially severe if the victim has a pre-existing medical condition. Even people with no vulnerabilities usually sustain broken bones and other injuries which take several months, at a minimum, to fully heal.

Furthermore, these injuries are normally permanent, because in many cases, they never “fully heal.” Instead, a fracture usually causes lingering loss of motion or another permanent disability.

Warehouse workers are at risk for hearing loss because, in general, warehouses are loud enough to cause hearing damage but not loud enough for mandatory OSHA rules to take effect. So, workers have no protection from damaging noise levels.

Usually, hearing loss isn’t too serious if doctors treat it immediately. However, most hearing loss victims don’t immediately see doctors. Once their conditions deteriorate, risky and radical eardrum surgery is the only option.

The aforementioned pre-existing conditions often affect repetitive stress injuries as well. Joints can only take so much bending, kneeling, stooping, and other such things, especially if they’re already somewhat weak.

Usually, a Tampa workers’ compensation attorney can obtain maximum benefits in these situations, as long as the work injury was the primary cause.

Usually, injured workers receive two-thirds of their average weekly wage for the duration of their temporary disabilities. Victims with permanent injuries usually receive lump sum payments. The amount usually depends on the nature and extent of the disability.

Frequently, the average weekly wage calculation is the most challenging component of this benefit. The AWW calculation doesn’t just include prior income. The AWW is also forward looking.

Assume Philip falls and breaks his arm the day before his probationary period ends. His lost wage replacement should reflect his higher future lost income. It must also reflect lost performance bonuses, overtime opportunities, and other future income bumps.