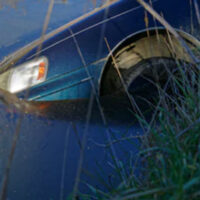 Few details were available after Pasco County Sheriff’s found two deceased 17-year-olds in a car that had plunged into a retention pond.

Investigators don’t know why a driver lost control of a 2003 Toyota Sequoia, drove onto a shoulder, and went underwater. A dive team found the completely-submerged vehicle, and the teenage boy and girl inside it, several hours after the crash.

The wreck happened on northbound Estancia Boulevard not far from the San Romano Drive intersection.

Many people ask “why” questions in the wake of a wrongful death, particularly when the victim is young. Survivors ask why it happened, and more importantly for purposes of this blog, they ask why they should file a personal injury action, especially if the victim knew the tortfeasor (negligent driver).

If a personal injury action simply blamed one driver for the wreck, filing such actions would make little sense in such situations. But these suits don’t blame anyone for anything. Instead, these suits compensate the survivors. That’s something that a criminal case usually doesn’t do.

Survivors need this compensation to pay accident-related bills, like funeral and burial costs. This money shouldn’t come from the survivors’ pockets. Furthermore, although money doesn’t fill the emotional void, it helps survivors carry on.

Instead of blaming a person for a wrongful death, a personal injury claim forces responsible parties to accept the consequences of their mistakes. Sometimes, the responsible person isn’t the person who was behind the wheel at the time of the wreck. More on that below.

Proof is very important in a car crash claim, since a Tampa personal injury lawyer must establish negligence (a lack of care) by a preponderance of the evidence (more likely than not). If an initial investigation yields little physical evidence or witnesses, attorneys must look elsewhere for the proof they need.

An attorney can use this evidence to piece together the events leading up to a crash, much like a person assembles a jigsaw puzzle.

Persons under 18 cannot own vehicles or other property. Therefore, when a teen driver causes a wreck, the negligent entrustment doctrine usually applies. This legal rule holds owners responsible for damages if they knowingly allow incompetent people to operate their motor vehicles. Evidence of incompetence includes:

These claims are a bit easier to prove in Florida. The Sunshine State has a vicarious liability law. Florida is the only state that judicially imposes strict vicarious liability on any owner, not just a head of a family, who entrusts his/her vehicle to an individual who negligently causes personal injury or property damage.

Injury victims are entitled to important financial benefits. For a free consultation with an experienced Tampa personal injury lawyer, contact Kobal Law. We routinely handle matters in Hillsborough County and nearby jurisdictions.